I have an old Pebble Steel that has gone unused for a long time because two of the three buttons on the right hand side have stopped working. There is a post on reddit talking about how to fix this, but the original forum thread with pictures is gone (actually the whole forum appears to be gone), so I though I would take some and make a little writeup. Possibly you will find this through google and it may help someone; the process is easier than I thought!

For reference, the original reddit post is here; we shall fix both the screen tearing and buttons. The proceadure is pretty straightforward - to fix the buttons an additional wire is soldered onto the ribbon connecting the buttons, which allows signals from the top 2 buttons to be sent back to the pebble motherboard.

I didn’t take any pictures of this, however you will need a torx head to remove the 4 bolts on the back of the Pebble Steel (PS). When removing the back cover be mindful of the fact that the vibrator assembly is glued to it and you will need to be careful to not damage the wiring. Having removed the back you can remove the main assembly which is all held together in the black plastic tray. Look for little tabs on the side of the tray, just visible above the edgeline of the pebble - put a flat screwdriver in and pivot to lift up. It should look like this:

The image above shows the correct orientation to consider for the bottom left contact on the button, TP4 is at the bottom on the same side. Before soldering a wire on you will need to remove the insulation tape around that area - its just a small block of yellow translucent tape, pry it off with some pliers. My advice at this point is to also cover the white backlight screen to avoid damaging it or any accidental spillages of flux or solder. Masking tape will do fine, you can stick something to the other side of the tape to prevent it from sticking to the screen itself.

I do not have any insulation on my wiring, the distance is so short I think it would melt during the process; you can also see that the guage of the wiring is maybe a bit too thick for the job. It’s hard to tell if I have a dry joint or not at this point, so some testing will be needed. I advise using a lower gauge of wire if you can (though this was already hard enough for me); use tweezers to hold it whilst you solder and cut afterwards.

I dont want this wire to short to anything so I put the yellow insulation tape previously removed, underneath the bypass wire. Then I cut a small section of masking tape and taped over the top. Slightly janky but this does keep everything insulated. 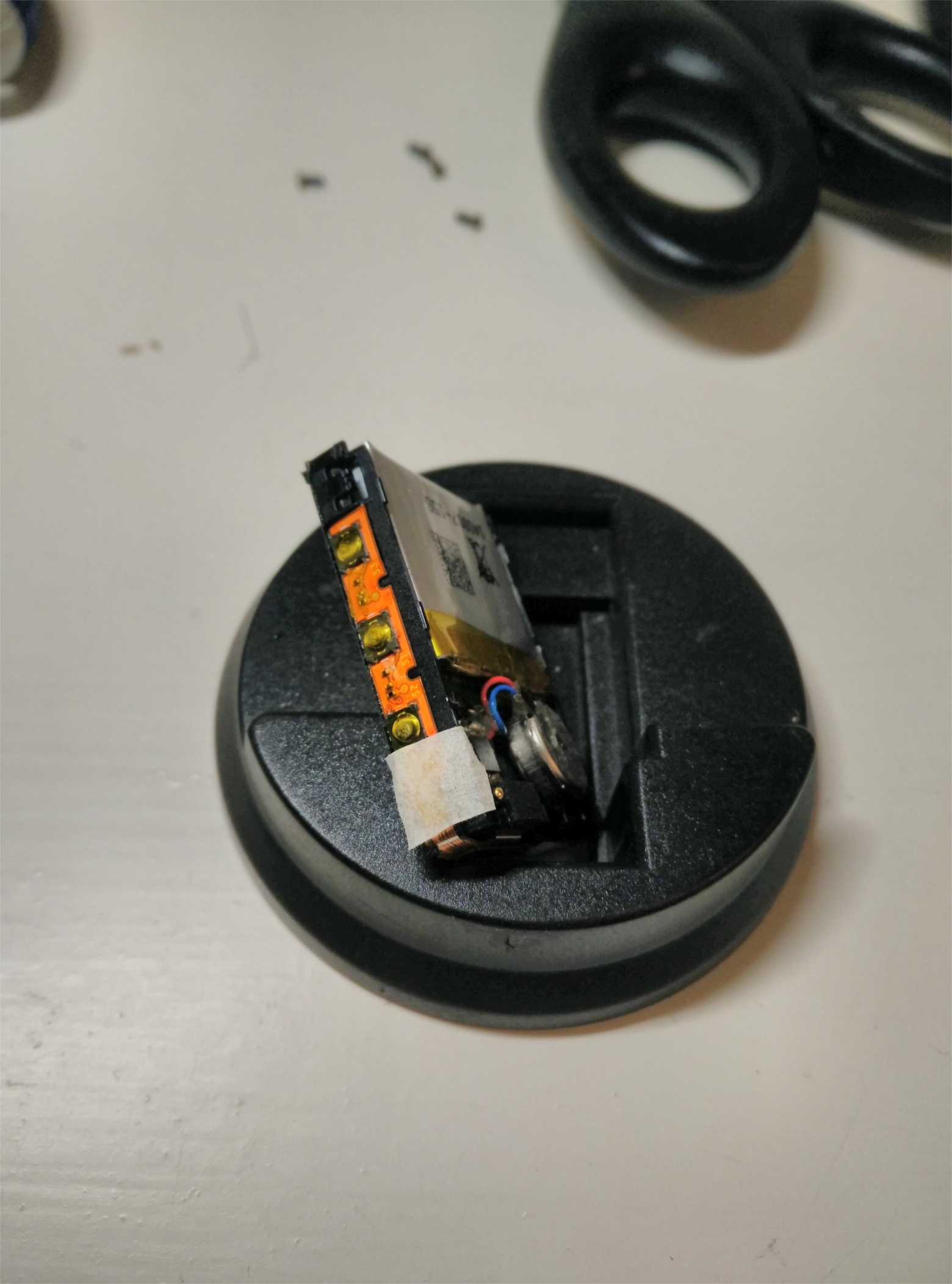 We can put a work-around for the screen tearing now; but first put the frame back into the metal watch housing. You can cut a strip of paper and fold it a few times, then put it between the pebbles innards and the back of the watch case; then screw everything down. It’s as simple as that and appears to have solved the screen tearing issue (I have now tested for a few days). 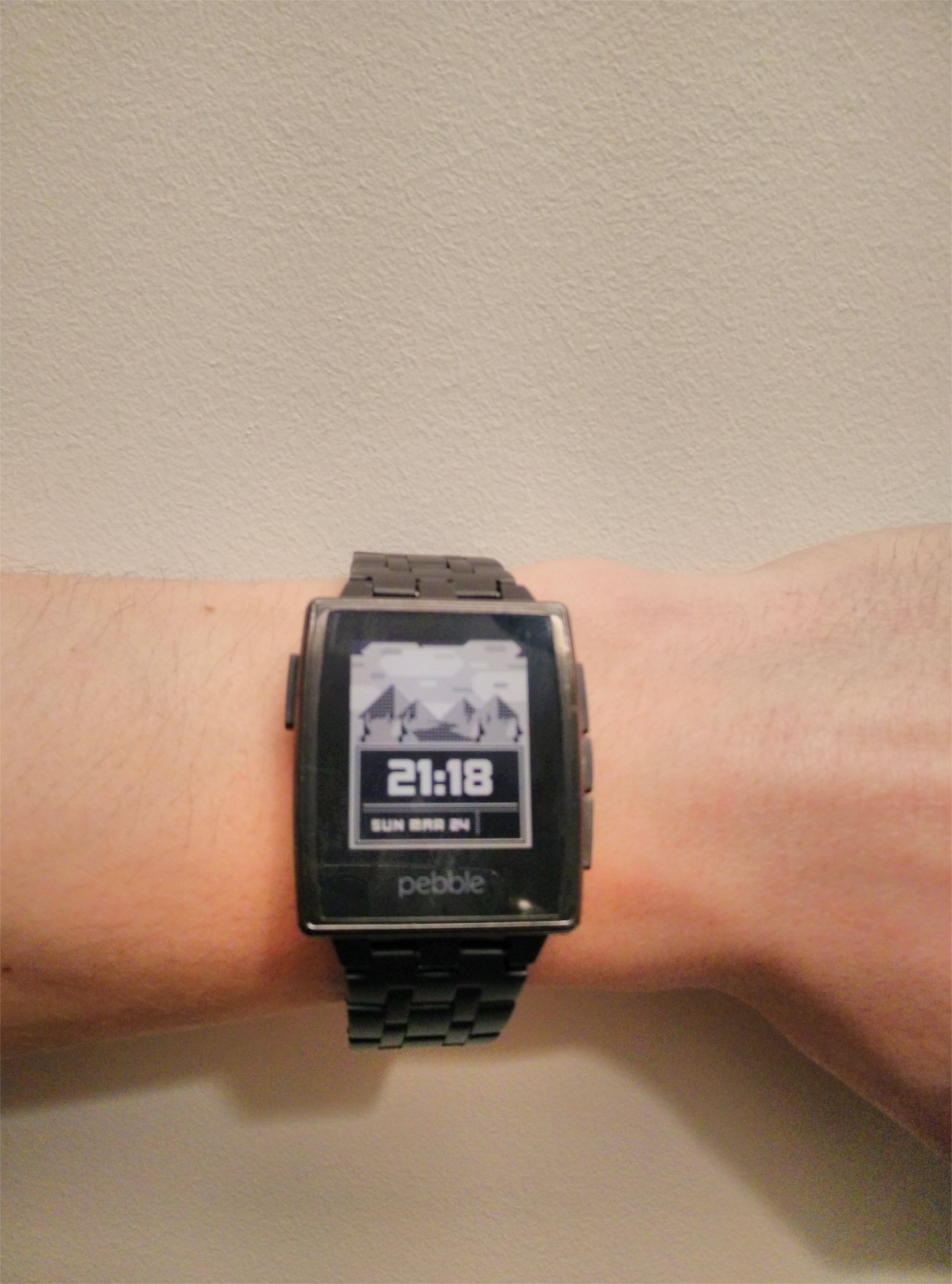 Congratulations! We now have a working watch! There are of course no more pebble servers so you’ll need to do something on the software side. If you haven’t already you have two options: